Why You NEVER Call The Police For ANYTHING!

Police beat woman so bad she calls 911 for help, then gets charged with assaulting the officers 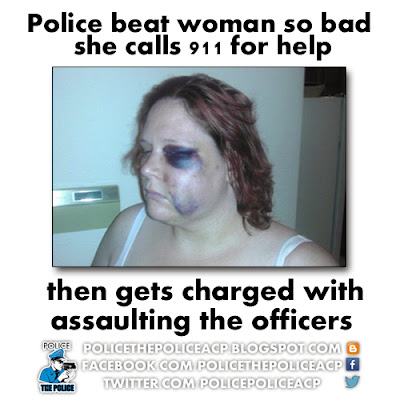 
FEDERAL WAY, Wash. —
Federal Way Police are reviewing their use of force during a recent arrest in which a
was punched several times , while being restrained. Police, in turn, are recommending the woman be charged with felony assault to an officer.

Megan Graham told her story to KIRO 7, her face still black and blue and swollen from the beating.

"I had a concussion. I still have a hard time understanding how things got so out of control, so fast," Graham said. "It was a total lack of communication."

Last Monday, Megan Graham parked her car at a Federal Way complex, where she was planning to visit a friend. She said as she was getting out of her car, she noticed a Federal Way Police car behind her.

"I understood that he saw me using a cell phone," said Graham. "I told the officer I was going to carry my dog thirty feet to a friend's apartment. I told him, hey, you can walk with me," she said. Graham says because the officer was speaking to her from his running car, she never heard his order to get back into her car. When the officer lunged and grabbed her wrist, she felt she was being attacked.

"I pulled my arm back, grabbed my phone and called 911 to call for help," she said. I told the officer I had mental and hearing disabilities, and didn't understand why he was trying to hurt me."

In 911 recordings obtained by KIRO 7, Graham is heard pleading the dispatcher for help.
"I was hoping other officers would show up to listen and deescalate the situation," Graham said.
In the 911 recording, Graham shouts at the officer: "You attacked me before you said anything! There is no point whatsoever for you to touch me like that, especially with my condition, so how dare you even touch me?"

The officer is clearly heard repeating "You are under arrest."

During the 911 call, another responding officer punched Graham several times in the face, and is heard loudly ordering her repeatedly to stop resisting. "I am not resisting," replied Graham. Graham says when an officer put his weight on her hip, which she says was previously injured, she reacted by trying to flip over. Federal Way police said she assaulted an officer during that struggle.

"That woman was not resisting, I saw it," said Graham's friend Deborah Fenwick, who saw the takedown. "That woman doesn't have a violent bone in her body. She's got a heart of gold. If she would have understood the officer's commands in the first place, she would have absolutely complied with him," Fenwick said.

In an to KIRO 7, a Federal Way Police spokesperson provided the officer's narrative of the struggle.

"As the officer approached, Graham squared off against him in a fighter's stance and attempted to strike him with closed fists. (The officer) responded with closed fist strikes to Graham's face which brought her to the ground where she was handcuffed," the officer wrote. "It was horrible. I just didn't understand any of it, "said Graham, who denies trying to hit the officer. "I told him about my condition. Punching me over and over in the eye is obviously excessive force. He could have handled it a lot differently," Graham said.
Posted by Chris/Blue Collar Moto at 2:36 PM