Notification Letter of Acceptance of Oath 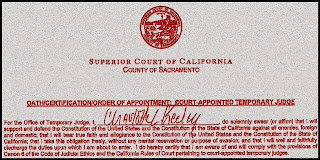 Notice how this oath does not bear any signature other than that of the person it's being administered to. It also lacks any official seal. And no. The letterhead is not an official seal!

If you must go to court, then send this first...chances are they will be like rats fleeing a sinking ship.... or not....hahahaa.....Lawful Notification Letter of Acceptance of Oath(header)

This letter is lawful notification to you, (Upper/lower case name), and this notification requires your written response, specific to the subject matter.

Notification of legal/lawful responsibility is the first essential of due process of law. As silence is acquiescence under the law, silence can only be equated with fraud where there is a legal or moral duty to speak, or where an inquiry left unanswered would be misleading, whether intentionally or not. Responses that are immaterial or irrelevant to the subject matter, or that are generally non-substantive, will be treated merely as a provision of information, and legally as a non-response, with willful intent to defraud.

In order to ensure unequivocal clarity, and to effect the removal of any and all assumptions and presumptions, you are hereby put on notice that this notification is not directed to the legal fiction, (ALL UPPER CASE NAME), but to you, (Upper/lower case name), in your private capacity as a non-fictional entity who has sworn an Oath of Office, and who, by virtue of that oath, has a mandate to serve the People that are of the Public.

The People's contracts, being the Ancient Charters and Statutes confirming the liberties of the Subjects (Biblical Law), Treaty of Paris 1783, the Maxims of Common Law, the Constitution of the united States of America with the Bill of Rights, the Constitution of the State of (your State), and every additional ordinance of man that inherently recognizes the supremacy of God and the pre-eminence of His Law, together with the mandated Oath of Office of the above named PUBLIC SERVANT, constitutes an unconditional and irrevocable offer of intent by the respective and adoptive governments and their officers to act, or to refrain from acting in a specified way toward private Citizens, and for other purposes, and is binding upon those who choose to be subject to it, as your Oath of Office has so bound you, as a PUBLIC SERVANT of our government.

Be it therefore known by these presents, that I, (My Upper/lower case name), a competent natural man/woman upon the land, do hereby and herein give formal Notice of Acceptance of the mandated Oath of Office of the above named PUBLIC SERVANT, (Upper/lower case name), (Title). The said Oath of Office being your open and binding and irrevocable offer, to which my acceptance does hereby ratify into a firm and binding, private, bilateral contract between us, by which you agree to uphold the Supreme Law of the Land, also known as the Constitution of the united States of America, with the Bill of Rights, and to perform all of your duties as a PUBLIC SERVANT, and to uphold and to protect all of my rights, and by which I agree to receive the said, and the implied protections and provisions of that law, and of my rights, both as and of the services of your Office, as the valuable consideration passing between us that consummates the acceptance of the contract as it was offered.

This, my Notice of Acceptance of your Oath of Office is made in good faith and explicitly without recourse. The contract now between us, now irrevocably consummated, pertains to your having knowledge of the law, and having the power to stop a wrong, and thus the duty to stop a wrong from being done, particularly where such a wrong results in, or causes any deprivations to my religious freedoms, and/or my civil rights, and/or my natural rights and liberties, the deprivation of which in whole or part, shall be deemed a breach of contract, a violation of substantive due process, a breach of public trust, and a breach of fiduciary duty, all or any of which you shall be held liable for, without recourse and without further notice.

of (Your State), personally appeared (your Upper/lower case name), who has

sworn to and subscribed in my presence, the foregoing document, on this

For those who don't know it, the titles MR., MRS, and probably Miss. are old English terms for someone who is in debt, just one step above a servant! I once had a prosecuting attorney DEMAND I address him as MR.! (oh the pride and arrogance of BAR registrants!! I would be happy to address you as MR.! in your lack of intelligence!!

The signatures keep getting moved.

The debtor goes on the left,

You and the Notary go on the right.

make at least a couple copies, give the Judge/Banker the originals and you keep as many copies as you need/want.

Notice how this Oath is witnessed. It also bears a seal.