Elections, understanding this blog and why I do it, and the posible future. 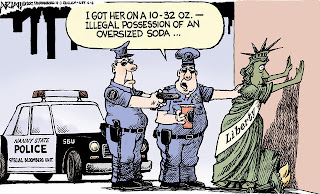 Yeah, that's the new definition of a crime by the ignorant crossing guards we call police these days.

So, I've seen some elections were held today. Whoopee dingdong. My conservative thinking friends who are not yet free, are complaining about the freedom stealing crap that passed, and are still blaming those libtards who voted for it. My libtard friends, well, I don't have any of them. That's not to say that I don't respect some if not most if the ideals they stole and pretended to represent in the beginning. Yeah, even Kennidy is still a grey area for me these days. He had to know, and he went along with it to a point, then mase the Special services to deal with such things, and was going to challenge the creditors of our national debt and their Federal reserve bank as well as their owned IRS and got murdered by the bastards for his actions. Hell, look at Reagan when he tried to challenge them. Oops, missed. Gonna play ball now Mr. CEO man? Yup. "I cant remember." That's been the punch line to every rip off''s joke ever since. "I did not, or do not, etc."

I honestly wonder just how many Libtards are actually out there, and how many you see in the news are just payed actors? Anyone with an Obama phone is a payed actor. Anyone on welfare is a payed actor. Then the actual payed for actors for the spin doctors, then throw in a bunch of brainwashed idiots who do nothing but sit on the couch and get loaded after work every night instead of trying to learn anything. I know because I was once one of them. (skin crawling) To counter that, I have been a statist idiot for most of my life as well as a card carrying member of the Republican party. Reagan visited my High School when I was in the AFJROTC. Yeah, I idolized the guy back then.

My common sense was ALWAYS being challenged to the point where I would just drop out of the subject and consider it above my head. It's confusing when you trust what spin doctors say on the news. Your grasping for information, and given nothing but contradictory OPINIONS. No wonder why most people just drop out of the whole thought process. Politics suck for a reason. That's it's design.  It's meant to confuse people and get them to drop out of the thinking process. They can ONLY support one side or the other on one or two party platforms. Both platforms are created by the same creditors. People who have not taken any time to do research, can NOT form an educated opinion. People who have never opened a law dictionary to find out what words actually mean in law rather than on the street corner. Yeah, that's some substandard smack Byitch!

Before I get to far off my original intent for this post, let me get back on track. If your voting for these freedom stealing things / thugs, then you are robbing yourselves. If your voting for not passing these freedom robbing things / thugs, then you are still voting for them. Your giving your consent in an Opinion Poll. That is consent my friend! You are raping yourself. "If you vote, you have no one to blame but yourself." It's YOUR CONSENT they operate from! They have no other power but your consent!

We are on the verge of awakening to one of two realities. Either a reality where truth rules, and we have power over our own life's, or a bitter one where basic human rights and the opportunity to exercise free will and personal responsibility for ones own actions will be suffocated by the dimwitted opinions of the self uneducated. DON'T mistake people who have memorized statistics as educated.They are the most dimwitted of them all. Complete slaves to their programing with not even the ability to address conformity, or think for themselves.

Well, we are on that precipice. Even before I started waking up to the reality of what's been going on and then learning the law and the words they use and their definitions in legal dictionaries, I felt the same thing. That we were standing on the precipice of something great. Now it is clear that the great thing has the potential of being either great in a good way, or great in a bad way. From the looks of things, the bad way is looking more likely to happen.

This blog is not to tell you anything. It's sole purpose is but to show you the door. It's you who have to walk threw it. In order for you to understand, and act, and take responsibility for your own actions and finally be free, you must learn these things I'm pointing out to you. Some of it is just an example of absurdity you still call truth. Shock therapy. I'm far from learning it all myself, and consider myself to be at only a middle school level. I started this blog last May to point out some stuff I learned, then found I still had too many questions about what I was presenting. So I took a few months off to regroup and learn more. I'm still learning, and feel I have been able to skip threw some of the mud of disinformation now. I still have some important questions to ask and understand. I do have the basics down now. And to understand much more than that, sometimes only shades the truth of the basic principles. Creates that dark cloud of confusion in the back of your mind even when reading the truth is ringing in your head like the Liberty Bell about to crack your skull.

Well, I like to keep the posts here short and to the point. I think I've gone beyond that point tonight.

Last words for tonight. If you've woken up, then it's time to grow up and leave the nanny state and it's childish privileges behind. If you ever wish to exercise rights, then you must also exercise responsibility equal to those rights. This is not a have your cake and eat it too world we live on. You must make your choices.