Making Your Own Official ID 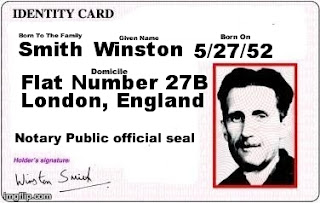 Please forgive my primitive attempt at making this example ID. The editing software I have at my disposal consists of what Photobucket provides for free, and a meme generator.

I see no reason to either include or exclude hair, eye color, or height and weight to the card. It is imperative that you have a Notary Public stamp this document with their official seal so as the state authority recognizes it as actual ID. If you do not currently have State ID, all you need to do is bring two people with their ID's with you to state for the record under oath as to your identity.

To make this I had to draw over the background wording. I think a background wording is a good feature. Maybe the word SOVEREIGN over and over again. I would also include a boarder consisting of something like this:
PROVIDING THIS CARD ON REQUEST IS NOT AN AGREEMENT TO CONTRACT. THIS CARD PROVIDES NO SURETY BY THE BEARER.

In any case, with a Notary Public stamp stating that all the information is true and correct, it must then be accepted as lawful ID by ANYONE requiring you to show ID. Banks, cops, courts, Notary Public's, The guy at the liqueur store, etc.  I was having an issue getting my stuff notarized not having a State ID. I asked the Notary if there was a way for me to do business without having to drag two people with me every time I had to get something notarized. He had no idea, so this is the solution to my problem. Especially only having a motorcycle to get around on, it's impossible for me to carry more than one person at a time down to the notary's office.

You could, and I would recommend adding some statute to the back side along with some lawful notes such as: 1) The bearer of this card is not for hire to conduct commerce on State highways or roads. Then give the statute and act that defines that rule in legal terms so the officer can 'understand' YOU!
Some sample rulings you may want to include here in the States.
http://accountabilityforpeople.blogspot.com/2013/06/right-to-travel-supreme-court-ruling.html

If anyone would like to add the statutes in the comments section it would be greatly appreciated. I may go look them up later today, but at the moment, I'm out of time for this post. It took a long time to edit Winston's ID. I would also probably change the word Signature to the word Autograph since a signature is a debt instrument.

One last note.
DO NOT ADD A ZIP CODE TO YOUR ID!
Check out this video to help explain why.