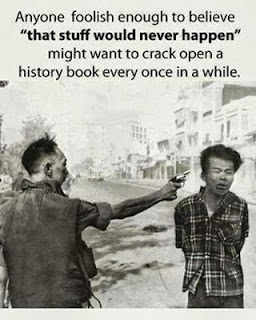 If your a history buff like myself, you already understand that people have not changed much in thousands of years let alone the last forty or fifty. If your also a student of what's going on today, and why it's happening, you will see the same events from ancient history happening all over again. Only now, it's on a global scale. The acts don't really change, just their size and scope. In fact, if your really in tune with it, I don't think predicting the future would be completely out of the realm of possibility. What we are experiencing today has all happened before.

For the most part, history is one big coverup. The deeds of those notable have been covered up repeatedly by their successors to take away any credit or to forget atrocities. The history books are written by the victors not the defeated. It's one big one sided perspective after another. At least in modern history, no matter how hard they try to cover up the truth, there is a paper trail of documents and laws one can fall back on. Even if the current administrative authorities refuse to follow the laws and acknowledge the truth.

We are done with the days of writing truths down in secret codes so we are not burned at the steak as heretics. The truths have never been so widely available as they are today since the invention of the internet. A few hundred years ago, if people wrote as freely on paper as we do on our blogs, we would of been executed for our efforts. The new witch hunts are the disinfo kings. Instead of killing us, they dilute the truth with bullshit to the point that the average man has no way of knowing what to believe. I don't believe unless you research almost full time, that anyone really has a chance of getting 100% of the story. Even then, it's a real fucker. I'm lucky enough to know a few guys who have been at this for a lot longer than I have. It's good to borrow perspectives from them. But if you don't do your own research, chances are you will be led down a false rabbit hole into disinfo land.