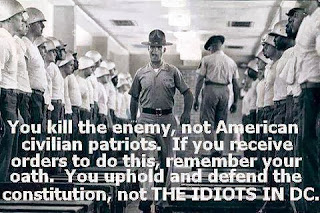 I'm just going to let this meme speak for itself.

It's safe to say that most of the serving military (below the rank of Colonel or Navy Captain) do not understand the rule of law, or the way things are really structured in government, and particularly above the government levels. That their Commander and chief is just a puppet for international banking cartels.

That being said, I understand the reasons people join the military is honorable. They are being misled just like everyone else. Misled may be too weak of a word for the lies being perpetrated on the people. It's fraud on a grand scale.

If orders come down like this, I can only hope that the practice of fragging becomes fashionable again against any brass that would issue such an order.

Why do you think Kennedy created the Special Services? He knew what was up. If shit were ever to hit the fan, I would trust first, anyone with the rank of NCO in one of the Special Services and no one above that rank as a general rule.
Posted by Chris/Blue Collar Moto at 2:34 PM

Email ThisBlogThis!Share to TwitterShare to FacebookShare to Pinterest
Labels: SHTF