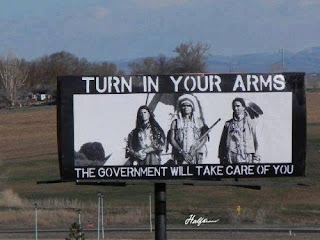 So I'm on a law & sovereignty board last night, and a guy comes on asking questions about sovereignty. OK, I'm your huckleberry. I spent a couple hours posting and answering questions. Then the cognitive dissonance started creeping into the guys replies. Who knows, maybe he was doing shots of tequila while sitting at the computer. It's been known to happen. But then the psycho racist crap began. He identified himself as American Indian, and I identified myself as Native American. It only got worse from there. I wound up blocking the guy. I have no tolerance for that crap these days. Just a complete waste of time.

The fact is, that it is not a race issue. We are all members of the human race. It is a greedy few who are responsible. The masses are also responsible in that they did and continue to do nothing to stop it from happening.

Despite people now finding themselves in the same boat, there have always been those who have seen what went (is still going on across the globe) on to all native peoples as wrong. People who have aligned themselves with those who were / are being taken advantage of.

Red White Black or Yellow, it makes no difference. Until we learn and grow into our sovereignty, these things will continue to happen. Without our rights and our sovereignty there will be no end to the injustices. Rights and sovereignty are inseparable. In fact, they are the same thing. If you do not possess sovereignty, you do not possess any rights. Without sovereignty, all you are left with are privileges. Same as a child has privileges which can be taken away by the parent. When you leave your parents house, and go off on your own, and apply for government programs, social security, drivers license, home loans, draft card, etc, the government takes over where your parents left off. They become mother and father. And they can, and will tell you what you can and can not do! 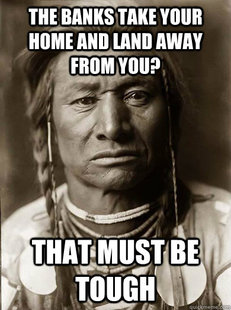 Posted by Chris/Blue Collar Moto at 9:47 AM