Is the UNITED STATES a country?

LII has no control over and does not endorse any external Internet site that contains links to or references LII. 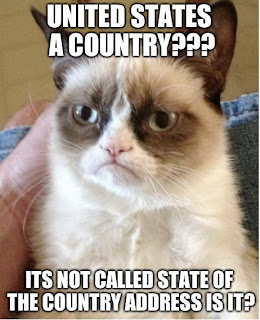 State of the UNION address... United States is a UNION.

"The United States shall guarantee to every state in this UNION a republican form of government, and shall protect each of THEM against invasion..."
~Article IV, section 4 of the U.S. Constituton

These definitions are taken from Bouvier's Law Dictionary 1856:

STATE. government. This word is used in various senses. In its most enlarged sense, it signifies a self-sufficient body of persons united together in one community for the defence of their rights, and to do right and justice to foreigners. In this sense, the state means the whole people united into one body politic; (q. v.) and the state, and the people of the state, are equivalent expressions. 1 Pet. Cond. Rep. 37 to 39; 3 Dall. 93; 2 Dall. 425; 2 Wilson's Lect. 120; Dane's Appx. §50, p. 63 1 Story, Const. §361. In a more limited sense, the word `state' expresses merely the positive or actual organization of the legislative, or judicial powers; thus the actual government of the state is designated by the name of the state; hence the expression, the state has passed such a law, or prohibited such an act. State also means the section of territory occupied by a state, as the state of Pennsylvania.

NATIONS. Nations or STATES are independent bodies politic; societies of men united together for the purpose of promoting their mutual safety and advantage by the joint efforts of their combined strength.

COUNTRY. By country is meant the STATE of which one is a member.

UNION. By this word is understood the United States of America.

Hooven & Allison Co. v. Evatt, 324 U.S. 652 (1945): "The term "United States" may be used in any one of several senses. [1] It may be merely the name of a sovereign occupying the position analogous to that of other sovereigns in the family of nations. [2] It may designate the territory over which the sovereignty of the United States extends, or [3] IT MAY BE THE COLLECTIVE NAME OF THE STATES WHICH ARE UNITED BY AND UNDER THE CONSTITUTION."
Posted by Chris/Blue Collar Moto at 11:02 AM