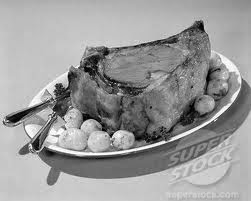 Rib roast 1950's. Notice the amount of fat and lack of tender cut strip along the bottom left side of the pic. Best damn part of a rib eye steak didn't even exist back in the 1950's.

If you've been wondering what's been going on with the cuts of beef you've been seeing at the store, this (unless you have some old old cookbooks like I do) will trip you out. No marbling, little meat, lots of fat was considered AA etc. Most of the cuts of beef in this, you wouldn't even recognize today in the store. I feel sorry for you kids born after 1990. You were probably too young to remember what a good cut of beef really looked like. This 63 yr old vid, I don't even know what's going on with some of it. They refer to marbling as huge chunks of fat on the sides of the steaks with no real marbling in the muscle. I don't know yet what they were doing in the 50's to feed their beef, but I would bet they were doing everything they could just to put fat on them. Lot of fat, little meat. Now we have super beef. I'm referring to both the American and the Japanese. 99% of what is now sold here in the states as Kobe beef is not even from Kobe Japan. Kobe is just one region of Japan this beef comes from. It's a generic name, and in all but 3000 beef here in the states, is a complete lie. 99% of the 'Kobe' beef here is actually a mix between a Black Angus, to some percentage, and a Wagyu (Japanese) beef.


One real kicker between back then when this was made and today (I'm assuming) is the quantity of grain they are fed, not to mention the antibiotics and other nasty stuff they pump into the meat. I learned today that by eating fermented grain (all grain contains an amount of fermentation), their systems become acidic. Their milk, their meat, everything is too acidic for people to eat it and digest it properly. ANOTHER REASON WHY PEOPLES ALLERGIES ARE AT RECORD LEVELS THESE DAYS! Not to mention lactose intolerance! Wen we eat acidic stuff, our own acidic stuff is forced into a battle yo break the other acidic stuff down. If we eat too much acidic stuff, it becomes toxic to us, because we can not break it down. Beef these days being fed percentage is total BS on the food posts as is on the law posts.

If you didn't check out any of the earlier posts I shared from that one farmer guy, you should if you want to start understanding the problems with our store bought meat these days. I've seen it all change a lot in my 45 years on this planet, and today it's about as pathetic as it's ever been. I have trouble finding any decent steak anywhere for any price these days here in LA. Nothing but crap sold in the stores. Crappy marbling, and if it has any marbling, then most of it is hard and inedible.

I didn't start out thinking about raising any beef on my place when I get one, but what I've learned today, it's about mandatory. Just enough that I can maintain in pasture given how much pasture space I can get. Crop rotation is about every 5 years per plot of pasture to keep it viable and healthy. So if you only have 5 acres of land, you can only raise a crop in one acre of land every year. After you cropped your main crop be it non GMO soy, corn, alfalfa, wheat, beans, etc, you can do a second crop of oats, then it's another 5 years before you can go back and plant that field again. Proper land stewardship does not take away from the land. It only adds to it.

We all could be living in a Eden, but corporate interests only take and make things that should be given back to the land, a chemical hazard that has to be dealt with down the road and becomes the next guys problem down stream.

The ecology is as big an issue as any other one out there these days. Especially with companies like Monsanto leveraging all government programs to get control of all our food. It's in my opinion the second, or even the first battlefield we face in this century. In reality, I believe it to be the most important one we face as a people. The big problem is just that nobody wants to learn their rights and start exercising them. People are just too damn comfortable eating their giant sized Tyson hot chicken wings to realize they are probably what is giving them cancer.

People, If your not at least willing to take responsibility for yourselves and learn some basic law, and the concepts of freedom, and the difference between civil liberties and rights, then at least grow some of your own damn food.

In any case, this vid is a BIG history lesson for anyone willing to watch it! If your over 40, you may remember this or that. If your under 40, you may just find it interesting. If your like me, and have been all pissed off by the current quality of beef at the stores, then you need to see this! I bet a rib roast was about $3 back then if that much. Not $53.oo 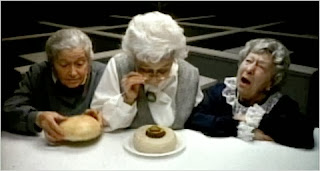 All anyone cared about beef in the 1980's till today.
Posted by Chris/Blue Collar Moto at 12:52 AM