Driving a "motor vehicle" requires a "Drivers License" However, "Traveling" in a "automobile" does not require a "Driver's License"! 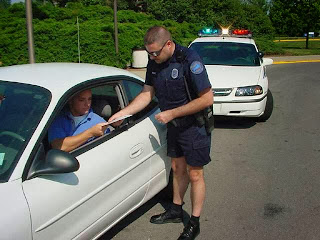 "DRIVING VS. TRAVELING"
Driving a "motor vehicle" requires a "Drivers License"!
However, "Traveling" in a "automobile" does not require a "Driver's License"!

AUTOMOBILE AND MOTOR VEHICLE
There is a clear distinction between an automobile and a motor vehicle. An automobile has been defined as:

"The word 'automobile' connotes a pleasure vehicle designed for the transportation of persons on highways." American Mutual Liability Ins. Co. vs. Chaput, 60 A.2d 118, 120; 95 NH 200.
While the distinction is made clear between the two as the courts have stated:

"A motor vehicle or automobile for hire is a motor vehicle, other than an automobile stage, used for the transportation of persons for which remuneration is received." International Motor Transit Co. vs. Seattle, 251 P. 120.
The term 'motor vehicle' is different and broader than the word automobile.'"; City of Dayton vs. DeBrosse, 23 NE.2d 647, 650; 62 Ohio App. 232.

The distinction is made very clear in Title 18 USC 31:

"Motor vehicle" means every description or other contrivance propelled or drawn by mechanical power and used for commercial purposes on the highways in the transportation of passengers, or passengers and property.
"Used for commercial purposes" means the carriage of persons or property for any fare, fee, rate, charge or other considerations, or directly or indirectly in connection with any business, or other undertaking intended for profit.

Clearly, an automobile is private property in use for private purposes, while a motor vehicle is a machine which may be used upon the highways for trade, commerce, or hire.

TRAVEL
The term "travel" is a significant term and is defined as:

"The term 'travel' and 'traveler' are usually construed in their broad and general sense...so as to include all those who rightfully use the highways viatically (when being reimbursed for expenses) and who have occasion to pass over them for the purpose of business, convenience, or pleasure." [emphasis added] 25 Am.Jur. (1st) Highways, Sect.427, p.717.
"Traveler: One who passes from place to place, whether for pleasure, instruction, business, or health." Locket vs. State, 47 Ala. 45; Bovier's Law Dictionary, 1914 ed., p. 3309.

"Travel: To journey or to pass through or over; as a country district, road, etc. To go from one place to another, whether on foot, or horseback, or in any conveyance as a train, an automobile, carriage, ship, or aircraft; Make a journey." Century Dictionary, p.2034.

Therefore, the term "travel" or "traveler" refers to one who uses a conveyance to go from one place to another, and included all those who use the highways as a matter of Right.

otice that in all these definitions the phrase "for hire" never occurs. This term "travel" or "traveler" implies, by definition, one who uses the road as a means to move from one place to another.

Therefore, one who uses the road in the ordinary course of life and business for the purpose of travel and transportation is a traveler.

DRIVER
The term "driver" in contradistinction to "traveler" is defined as:

"Driver: One employed in conducting a coach, carriage, wagon, or other vehicle..." Bovier's Law Dictionary, 1914 ed., p. 940.
Notice that this definition includes one who is "employed" in conducting a vehicle. It should be self-evident that this person could not be "travelling" on a journey, but is using the road as a place of business.

OPERATOR
Today we assume that a "traveler" is a "driver," and a "driver" is an "operator." However, this is not the case.

"It will be observed from the language of the ordinance that a distinction is to be drawn between the terms 'operator' and 'driver'; the 'operator' of the service car being the person who is licensed to have the car on the streets in the business of carrying passengers for hire; while the 'driver' is the one who actually drives the car. However, in the actual prosecution of business, it was possible for the same person to be both 'operator' and 'driver.'" Newbill vs. Union Indemnity Co., 60 SE.2d 658.
To further clarify the definition of an "operator" the court observed that this was a vehicle "for hire" and that it was in the business of carrying passengers.

This definition would seem to describe a person who is using the road as a place of business, or in other words, a person engaged in the "privilege" of using the road for gain.

This definition, then, is a further clarification of the distinction mentioned earlier, and therefore:

Travelling upon and transporting one's property upon the public roads as a matter of Right meets the definition of a traveler.

Using the road as a place of business as a matter of privilege meets the definition of a driver or an operator or both.

TRAFFIC
Having defined the terms "automobile," "motor vehicle," "traveler," "driver," and "operator," the next term to define is "traffic":

"...Traffic thereon is to some extent destructive, therefore, the prevention of unnecessary duplication of auto transportation service will lengthen the life of the highways or reduce the cost of maintenance, the revenue derived by the state...will also tend toward the public welfare by producing at the expense of those operating for private gain, some small part of the cost of repairing the wear..." Northern Pacific R.R. Co. vs. Schoenfeldt, 213 P. 26.
Note: In the above, Justice Tolman expounded upon the key of raising revenue by taxing the "privilege" to use the public roads "at the expense of those operating for gain."

"Traffic: Commerce, trade, sale or exchange of merchandise, bills, money, or the like. The passing of goods and commodities from one person to another for an equivalent in goods or money..."; Bovier's Law Dictionary, 1914 ed., p. 3307.
Here again, notice that this definition refers to one "conducting business." No mention is made of one who is travelling in his automobile. This definition is of one who is engaged in the passing of a commodity or goods in exchange for money, i.e.., vehicles for hire.

Furthermore, the word "traffic" and "travel" must have different meanings which the courts recognize. The difference is recognized in Ex Parte Dickey, supra:

"..in addition to this, cabs, hackney coaches, omnibuses, taxicabs, and hacks, when unnecessarily numerous, interfere with the ordinary traffic and travel and obstruct them."
The court, by using both terms, signified its recognition of a distinction between the two. But, what was the distinction? We have already defined both terms, but to clear up any doubt:

"The word 'traffic' is manifestly used here in secondary sense, and has reference to the business of transportation rather than to its primary meaning of interchange of commodities." Allen vs. City of Bellingham, 163 P. 18.
Here the Supreme Court of the State of Washington has defined the word "traffic" (in either its primary or secondary sense) in reference to business, and not to mere travel! So it is clear that the term "traffic" is business related and therefore, it is a "privilege." The net result being that "traffic" is brought under the (police) power of the legislature. The term has no application to one who is not using the roads as a place of business.

LICENSE
It seems only proper to define the word "license," as the definition of this word will be extremely important in understanding the statutes as they are properly applied:

"The permission, by competent authority to do an act which without permission, would be illegal, a trespass, or a tort." People vs. Henderson, 218 NW.2d 2, 4.
"Leave to do a thing which licensor could prevent." Western Electric Co. vs. Pacent Reproducer Corp., 42 F.2d 116, 118.

In order for these two definitions to apply in this case, the state would have to take up the position that the exercise of a Constitutional Right to use the public roads in the ordinary course of life and business is illegal, a trespass, or a tort, which the state could then regulate or prevent.

In the instant case, the proper definition of a "license" is:

"a permit, granted by an appropriate governmental body, generally for consideration, to a person, firm, or corporation, to pursue some occupation or to carry on some business which is subject to regulation under the police power." [emphasis added] Rosenblatt vs. California State Board of Pharmacy, 158 P.2d 199, 203.
This definition would fall more in line with the "privilege" of carrying on business on the streets.

Most people tend to think that "licensing" is imposed by the state for the purpose of raising revenue, yet there may well be more subtle reasons contemplated; for when one seeks permission from someone to do something he invokes the jurisdiction of the "licensor" which, in this case, is the state. In essence, the licensee may well be seeking to be regulated by the "licensor."

"A license fee is a charge made primarily for regulation, with the fee to cover costs and expenses of supervision or regulation." State vs. Jackson, 60 Wisc.2d 700; 211 NW.2d 480, 487.
The fee is the price; the regulation or control of the licensee is the real aim of the legislation.

Are these licenses really used to fund legitimate government, or are they nothing more than a subtle introduction of police power into every facet of our lives? Have our "enforcement agencies" been diverted from crime prevention, perhaps through no fault of their own, instead now busying themselves as they "check" our papers to see that all
Posted by Chris/Blue Collar Moto at 2:47 PM