Letter To The Governor Of California Demanding Return Of Stolen Property 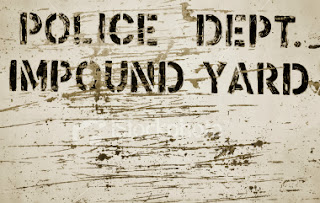 AN ATTEMPT TO SEEK RETURN OF STOLEN PROPERTY

This letter constitutes an attempt to resolve amicably a criminal matter pertaining to the referenced information above, which caused an automobile to be stolen by one of your executive agencies, and under color of law.

Governor Brown, the undersigned discovered well over ten years ago that motorists living in California who are not engaged in the privilege of “driving”, a profession -- while behind the steering wheels of their automobiles as they travel from home to office, etc., are nonetheless coerced into registering their means of travel on the highways by automobile,with the Department of Motor Vehicles, as if it’s a requirement of law, when the truth belies this false propaganda.

As a result, the undersigned elects to travel in her automobile, but WITHOUT renewing unnecessary registration with the DMV, via the explicit exclusion identified in the California Vehicle Code, section 260(b) – as contrasted with CVC Sect. 260(a).  In other words, unless one is trafficking in a commercial context, the exercise of non-professional travel to any destination intended, is NOT one that the DMV has any right whatsoever in attempting to regulate.

But the addiction of ill-gotten gain, and for so many decades of this corruption, has rendered the DMV and police agencies in California into actually believing that there are no exclusions to the registering of automobiles by anyone living in California, when that’s nothing farther from the truth.  CVC Sect. 260(a) does NOT say “all vehicles” in California, but only commercial ones need to be registered with the DMV.  As a result of an erroneous belief based upon false propaganda, the undersigned to this letter lost her car to an agent of the California Highway Patrol (CHP), who made a false arrest – and then who stole the car, and compelled a signed Notice to Appear (albeit one signed under restraint, with the initials V.C., i.e. vi coactus).  Even after questioning three times to the arresting officer as to why the roadside stop was executed, no answer was forthcoming, other than something mentioned about “policy” but not in violation of law (such as in causing a public offense), at the third time of asking.

Nowhere on the Notice to Appear was the reason for the stop even alluded to.  After doing a “fishing expedition”, the arresting officer “discovered” from display of the VIN that the car had not been registered for over a year.  Upon discovering the actual fraud of the DMV by their illegal insistence of compelling an unwanted exaction of year to year registrations, when no commercial nexus exists in non-professional automobile travel behind the steering wheel, why would anyone who discovers this extortion racket from an executive department subordinate to the Governor, wish to do business with them again?  And because the DMV adamantly believes in its own hubris, it’s an insult to even consider attempting to communicate with such an agency which is fully bent on continuing its criminal extortion racket, with virtual impunity.

Governor Brown, because the undersigned lost her car to CHP’s illegal impound on October 1, 2013, based upon the false arrest and discovery by the CHP of an intentionally allowed to expire registration, why should the undersigned not approach the line authority above the CHP for redress of grievance, i.e. at the office of Governor?  Hence this letter.

The undersigned will not entertain superstitions that because the corporate United States actually went bankrupt in 1933 [causing public law to give way to “public policy” in 1938, per ruling in Erie Railroad Co. v. Tompkins, 304 U.S. 64 (1938) by the SCOTUS], that somehow the people living in California within the asylum state of the California Republic, should not be permitted to own property such as automobiles, as is their unalienable right to do.  And yet all automobile dealers are complicit in hand-delivering the title documents of new automobiles to the DMV, and then never informing the buying public such title docs exist, let alone are clandestinely delivered to the DMV, which agency then apparently assumes it may dictate terms of “ownership” upon the actual purchasers, by demanding registration of all automobiles.

This action constitutes treason by the corporate State of California and a covert waging of war upon the non-fictional people of California, who are domiciled in the asylum state of the California Republic.

Governor Brown, as you are in charge of the CHP (the racketeering of the DMV being planned to address via civil RICO action later), the undersigned is not requesting, but is demanding that you, sir, contact the CHP Commissioner Joseph A. Farrow, and order him to release the impounded car to the undersigned, as early as practicable, and without cost to the undersigned to remove it from the storage company in North Hollywood.  The arresting CHP officer’s name is (name and badge no. redacted for privacy).

A false arrest should not permit the fruit of the poisoned tree, i.e. after-the-fact discovery of an intentionally rejected registration for the car, to sustain a criminal infraction (oxymoron intended), when all the undersigned wishes to do is exercise the exclusion to registration found at CVC Sect. 260(b).

However, because of the completely entrenched corruption of the corporate state agencies and their covert war being waged against the people of California who exercise their sovereignty (per Calif. Government Code sections 11120 and 54950, the Bagley-Keene Open Meeting Act, and the Ralph M. Brown Act, respectively), to travel the streets and highways by lawful and unalienable right, the undersigned intuitively knows that without an extraordinary executive directive sent to the CHP from your office, Governor Brown, nothing of redress will be capable of achieving, and no, not in the Superior Court either.

For the above reasons, the undersigned is NOT permitting any delay in preparing litigation to name you, Governor Brown, as a defendant in litigation under Title 18 USC, Sect. 242, and 241 for co-conspirators to be named and served in their private capacities, which includes the parties named and copied on this letter.

As magistrates in the Superior Court have intoned, “We can do this the easy way, or do it the hard way.”  The easy way to avoid a committed intention by the undersigned to litigate against the criminally acting corporate State of California, starting with the Governor on down, is to act without delay to have the automobile that’s impounded in North Hollywood be released to the undersigned and without compulsion to re-register the car, when it does not meet federal “Motor Vehicle” criteria for exercising commercial activities upon the streets and highways (per Title 18 USC, Sect. 31 definition).  The automobile owned by the undersigned is classified as a “consumer good” [UCC 9-109(1)], and because it’s not used in any commercial activity, it’s not needed to be registered with the DMV.

The hard way will be by litigation being prepared and which will be served upon you, Governor Brown, by process server, and as soon as practicable.  If you wish to ignore this notice and demand, then do nothing. The litigation will come to you, and we shall either go to a federal court trial, or to an out of court settlement for sufficient damages to be claimed, as a result.

However, because of personal self-interest, the undersigned offers the following alternative – as a one-time opportunity only, to avoid the unpleasantness of legal action now being planned.

Provided the demand noted above is exercised in favor of the undersigned, no litigation will be pursued against you, Governor Brown, and yet the undersigned has still suffered losses incurred, with much vexation of spirit.  However, this incident of losses may be construed as reversible error, in the interests of justice, even if litigation has to be withdrawn.  This is my only offer to you, Governor Brown, and it’s a reasonable one, given the forgoing circumstances and acknowledgment that the corporate State of California is inherently corrupted beyond measure.  Communication with the undersigned must be in writing.

P.S.  It is acknowledged that the California Department of Motor Vehicles (DMV) routinely and illegally acquires via theft by illegal conversion, the title documents of factory delivered automobiles sold by dealers to the general public. The automobile title documents are called the Manufacturers Certificate of Origin (MCO), or the Manufacturers Statement of Origin (MSO), depending upon the manufacturer’s preference of term used.

This theft of documents involves collaboration of conspiracy with each automobile dealer, who does not inform new car buyers that such title documents are issued by the manufacturer, let alone even exist.  The resulting duplicity is that the DMV purports disingenuously to be the lawful owner of virtually all new automobiles sold in California, via theft by deception to unlawfully acquire possession of title documents from the manufacturer.  This crime constitutes actual and discoverable fraud, as is committed against all new automobile purchasers without their knowledge and without their consent.

Adding insult to injury, the DMV then uses its undisclosed and unlawful possession of title documents to demand by extortion that all motorists acquire automobile registration.  This extortion racket is willful violation of California Vehicle Code Section 260(b), which sub-paragraph excludes requirements to register non-commercial automobiles.