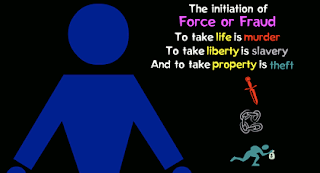 I found this quote on the World Freeman Society's page just now.


"Whatever may be open to disagreement, there is one act of evil that may not, the act that no man may commit against others and no man may sanction or forgive. So long as men desire to live together, no man may initiate—do you hear me? no man may start—the use of physical force against others.

"To interpose the threat of physical destruction between a man and his perception of reality, is to negate and paralyze his means of survival; to force-him to act against his own judgment, is like forcing him to act against his own sight. Whoever, to whatever purpose or extent, initiates the use of force, is a killer acting on the premise of death in a manner wider than murder: the premise of destroying man's capacity to live.

"Do not open your mouth to tell me that your mind has convinced you of your right to force my mind. Force and mind are opposites; morality ends where a gun begins. When you declare that men are irrational animals and propose to treat them as such, you define thereby your own character and can no longer claim the sanction of reason—as no advocate of contradictions can claim it. There can be no 'right' to destroy the source of rights, the only means of judging right and wrong: the mind.

"To force a man to drop his own mind and to accept your will as a substitute, with a gun in place of a syllogism, with terror in place of proof, and death as the final argument—is to attempt to exist in defiance of reality. Reality demands of man that he act for his own rational interest; your gun demands of him that he act against it. Reality threatens man with death if he does not act on his rational judgment: you threaten him with death if he does. You place him into a world where the price of his life is the surrender of all the virtues required by life—and death by a process of gradual destruction is all that you and your system will achieve, when death is made to be the ruling power, the winning argument in a society of men.

"If there are degrees of evil, it is hard to say who is the more contemptible: the brute who assumes the right to force the mind of others or the moral degenerate who grants to others the right to force his mind. That is the moral absolute one does not leave open to debate. I do not grant the terms of reason to men who propose to deprive me of reason. I do not enter discussions with neighbors who think they can forbid me to think. I do not place my moral sanction upon a murderer's wish to kill me. When a man attempts to deal with me by force, I answer him—by force.

"It is only as retaliation that force may be used and only against the man who starts its use. No, I do not share his evil or sink to his concept of morality: I merely grant him his choice, destruction, the only destruction he had the right to choose: his own. He uses force to seize a value; I use it only to destroy destruction. A holdup man seeks to gain wealth by killing me; I do not grow richer by killing a holdup man. I seek no values by means of evil, nor do I surrender my values to evil.

~John Galt
I'll add to that another excellent speech from the movie The Fountainhead by Gary Cooper.