If You Vote, You Can't Complain 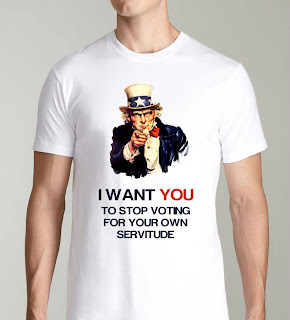 There are three possible things you can be in life.
1. One of the People [the sovereign boss / stockholder]
2. A government employee [the servant / trustee]
3. A citizen [dependent / child / dept collateral]

The people vote in the government, not the citizens. It's the citizens job to be governed like children. A voting poll is nothing more than an opinion poll for citizens. By registering to vote, you give your consent to be ruled over by government. The People are the ones who rule over government. If you claim to be a corporate US citizen, then you are NOT one of the People.

Among other things, gov exists to be the baby sitter for the citizens. The government teet. They have been doing a lousy job of it. Instead of raising healthy children, it makes them dependent to further perpetuate itself. Government is like a big monster that feeds off the citizens instead of teaching them how to become one of the People. I'll just assume at this point that the majority of the [1%] People like it that way since it makes them money. It's up to every individual citizen to decide for themselves if they want to learn and grow out of this childish dependency and become one of the People since they are not born with the silver spoon of foreknowledge passed down from their fathers in their mouth.


Posted by Chris/Blue Collar Moto at 9:15 AM