Required Knowledge if one must enter a court / and or administrative notice process. 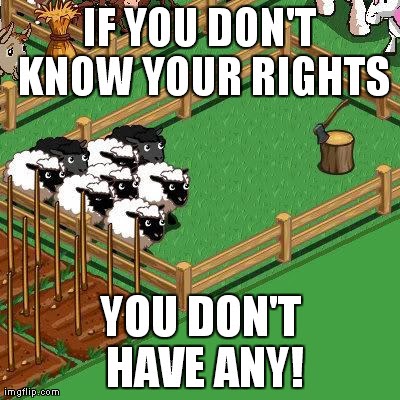 
I do not understand the charge.


I am here to insist on sufficient (N)otice, (D)isclosure, and (D)iscovery, so that I may

(3) Rule of action or procedure for that jurisdiction.

You need only ask the right questions.Is this civil or criminal? And if criminal, admiralty maritime or common law? Is this a state Court of the Judiciary, or a federal franchise incorporated for profit setting?

"I present myself before the court, to be apprised by opposing counsel the full and fair notice, disclosure and discovery of the nature and cause of this action, including the petitioners standing to sue, the jurisdiction, the claim and rule of action for that jurisdiction. So that I may ascertain my defenses in these proceedings, Am I charged in the original process as a natural being or corporate person? As the original process does not specify, it does not comport with the requirements of due process nor does it provide required notice".

"Special Appearance; A term used in the American law of civil procedure to describe a civil defendant's appearance in the court of another state solely to dispute the personal jurisdiction of the court over that defendant. Prior to the advent of this procedure, defendants had to either appear in the other state's court to defend the case on the merits, or not show up in court at all, and then mount a collateral attack on any judgment rendered against them, when the plaintiff came to the defendant's state to collect on the judgment. In a legal catch-22, if the defendant appeared solely to contest jurisdiction, the court would then be permitted to assert jurisdiction based on the defendant's presence..

"Do to the prosecuting Attorney and your failure to notice or dispute my claim, documents filed, and also my verbal notice during court. This actually constitutes Acquiescence on the courts part, and I accept the courts silence as such, and being so Law demands that this Case be Vacated with Prejudice".

It does not appear you are alleging or accusing me of any form of crime, but rather that I am in breach of a contractual agreement. Is this true?

I insist you to Produce a copy of this contract I am accused of violating.

The case of the State lacks merit as it lacks ALL elements of a valid cause of action, corpus delicti, standing, is wholly devoid of actual or justifiable controversy, and as such there is not even jurisdiction for the court to hear the case.

Any such contract that might exist would be inherently null and void ab initio (from the beginning) as the contract would have been missing most of the elements needed for a contract to be binding (full disclosure).

Any action taken will result in my "special appearance" to challenge jurisdiction, while proceeding Sui Juris which will result in a dismissal of charges without a 'real party of interest' .

If my rights are NOT observed and respected ALL peaceful and lawful remedy available at law will be utilized to Lawfully and Peacefully defend under warrant of the law, the lawful rights I am claiming and exercising.

My FEE SCHEDULE for any transgression by peace officers, government principals or agents or justice system participants is (1 oz of gold) ONE OUNCE OF GOLD per hour, (which of this date January 8, 2013 is 1,662.00 per ounce) or portion thereof for being questioned, interrogated or in any way detained, harassed, searched or otherwise regulated and (5oz of gold) FIVE OUNCES OF GOLD or portion thereof, per hour, or $5,000 if gold value falls below $1,000, if I, (or any property I own) am handcuffed, transported, incarcerated or subject to any adjudication process without my express written and Notarized consent.

The officer made use of emergency lights to effect a non emergency, non felony stop, in addition to non presentment of the original bill.

I claim that the law of agent and principal does apply and that service upon one is equal to both.

There is limited opportunity to give a personal account of your evidence in court. Most evidence is provided by affidavit. This allows a case to run more quickly and efficiently as all parties know what evidence is before the Court.

Generally, an affidavit should not set out the opinion of the person making the affidavit; that is, it must be based on facts not your beliefs or views. The exception is where the person is giving evidence as an expert; for instance, a psychologist or licensed valuer.Where possible you should avoid referring to facts that are based on information received from others (known as hearsay evidence). There are, however, a number of exceptions to the hearsay rule. If you need to rely on hearsay evidence in your affidavit, get legal advice to see whether it would be admissible in court.

You should not refer to anything said or documents produced in connection with an attempt to negotiate a settlement of your dispute, as these are not admissible as evidence in Court. There are some exceptions and if you want to refer to these communications you should read section 131 of the Evidence Act 1995 (Cth). If you are unsure about what can and cannot be included in your affidavit, you should seek legal advice.

Attaching documents If you refer to a document in your affidavit, you must attach a copy of it to the back of your affidavit (known as an annexure). Examples of an annexure are a contract of sale or a child’s school report. If there is more than one annexure, you need to refer to each one by a number or letter; for example, Annexure 1 or Annexure A. You also need to number the annexures consecutively, that is, from the first page of the first annexure to the last page of the last annexure.Each annexure must have a statement signed by the authorized person identifying the annexure as the document referred to in the affidavit. The wording of the statement is:This is the document referred to as Annexure [insert reference number] in the affidavit of [insert deponent’s name], sworn/affirmed at [insert place] on [insert date] before me [authorized person to sign and provide name and qualification]. The statement must be signed at the same time as the affidavit and by the same authorized person.